In 1974, Hungarian sculptor and architecture professor, Ernő Rubik, invented The Magic Cube, a 3-D combination puzzle that had 3 layers. It’s fair to say that when it launched as a Rubik’s Cube in the United States in the 1980s every kid was obsessed with solving their cube. Without a cheater’s guide, I could never solve my Rubik’s cube. Without help, and with a lot of patience, I solved the triangular-shaped puzzle, and the Missing Link, which was a 4-sided puzzle having sliding pieces that had pictures of chain links on them. 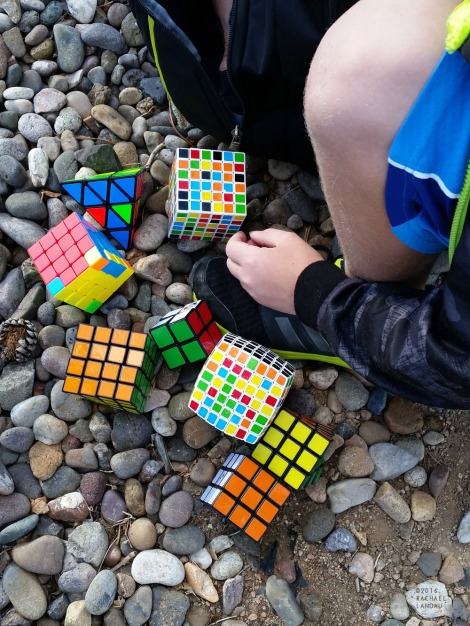 The Cuber Emptied his Backpack On The Ground

I’m acquainted with a 10-year old cuber. He has confessed that he’s certain these 3-dimentional puzzles are the best way to spend his free time if he can’t play video games. He emptied his school backpack to reveal what he takes with him everyday. Pictured above is his collection. He’d rather try and solve one of these than play an aggressive round of 4-square on the playground.  “The secret to solving these,” he told me, “is to get the central pieces in the right orientation, and then go after the sides.”

When I made this photograph, I thought the rounded object beneath his hand was a stuffed toy. Actually, it’s another exasperating cube having 7-layers!  The cuber complained that seven layered puzzle pieces have a tendency to pop out accidentally.

I’ve read that one in seven people on the earth has touched a Rubik’s Cube. Whether or not that claim is true, today kinetic puzzlers are able to step it up to 2, 4, 5, 6, 7 and 8-layered puzzles. For those who can’t get enough of solving these, one Greek company markets classic and and dizzying bi-colored versions for those who can’t get enough. One may even have his own photos custom-printed onto the sides of a Rubik’s cube!