Just like people, hot air balloons come in all shapes, sizes and colors. I can’t think of a better way to prove that to my children than to bring them to a Special Shape Rodeo at the Albuquerque International Balloon Fiesta. Enjoy this brief glimpse into mere highlights of this year’s special shapes from two days of my photo taking.

The Special Shape Rodeo sessions are held at sunrise and are among the most popular days of Fiesta. Whimsical hot air balloons with zany designs get inflated for both ground display and launching. At twilight, a Glowdeo is held when the same balloons are inflated to stay on the field for a static display followed by fireworks. Shape Rodeos are held toward the end of Fiesta. They are enormously popular with families. In fact, the Albuquerque Public Schools declares a four-day Fall Break weekend called “Vernal Holiday” overlapping with the Shape Rodeos. It allows families to bring children to nightly events and early morning launches; school attendance would otherwise be abysmal on the last Thursday and Friday of Fiesta!

Special shaped hot air balloons are dazzling subjects for photography. They are the epitome of the lively spirit within the balloonistas who design, care for, and fly them. Like at other Mass Ascensions, balloons are inflated in waves all across the grass. It is exciting everywhere one looks on the Balloon Park’s grass field. Thousands of spectators and hundreds of balloon crews are up close to the equipment. In the image immediately below, the blanket of spectators in the bottom third demonstrates the enormity of special shapes.

When standing near the nylon envelope of an inflating balloon, it fills up and only that shape can be seen; everything else falls away from view. Meanwhile another gem of a shape will be filling up nearby or already have launched and go sailing by in the breeze. Strange as it sounds, one can easily miss views of dozens upon dozens of other shapes. Even with two rounds of morning ascensions, I only dipped into a pool of the hundreds that lifted off. 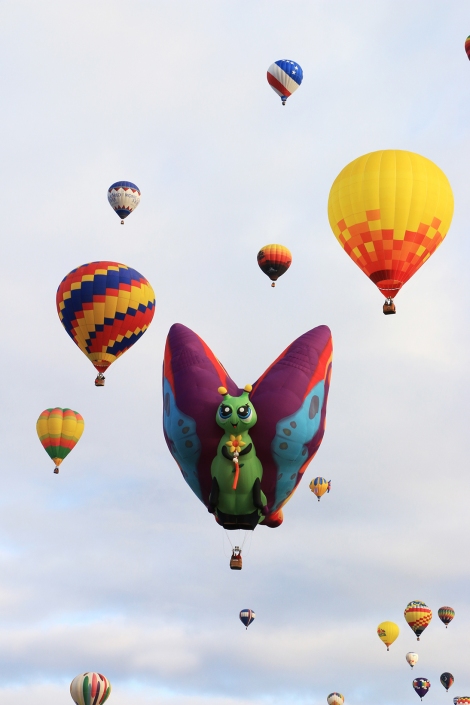 Participating balloon enthusiasts may bring multiple aerostats to Fiesta; some have several standard shapes and one or more special shapes. They print out small trading cards, like old school baseball cards, and distribute them to enthusiasts at the event. Children of all ages collect the cards to be admired during the year. Some shapes return to Fiesta year after year. Others make one appearance,  then continue on to a global circuit without being seen again in New Mexico. Balonismo (that’s ballooning in Portuguese!) is an expensive hobby, after all. The pilots and balloons travel here from around the world: Belgium, Brazil, Germany, UK. They come from all around the United States, too: Georgia, Colorado, Illinois, Oklahoma, Massachusetts, New Mexico, New York, Minnesota, Texas to name a few states represented.  For me, the best memories of these special shapes are made by photographing them! 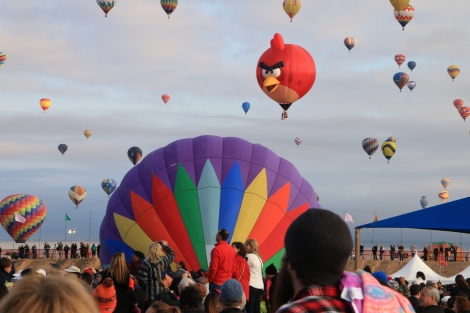 Balloon Fiesta 2014 | Angry –for having to get up so early in the morning–Bird.

Balloon Fiesta 2014 | Speedy (aka the Roadrunner) blows us a raspberry. Meep- Meep!

Balloon Fiesta 2014 | Koshare Gallup. From what I understand, Koshare is a sacred Pueblo Indian clown society that represents ancestral spirits in ceremonies invoking rain and fertility. We want that rain AFTER Balloon Fiesta! 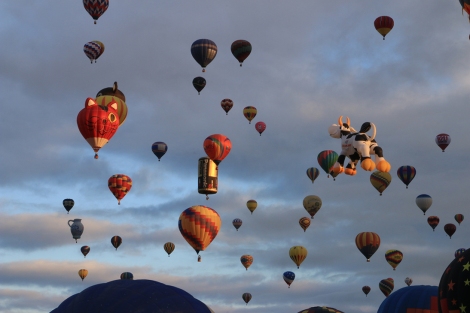 Balloon Fiesta 2014 | Cutie Dink winks at the sun rising on a mass ascension. Like that Panasonic battery and Airabelle the Flying Cow? 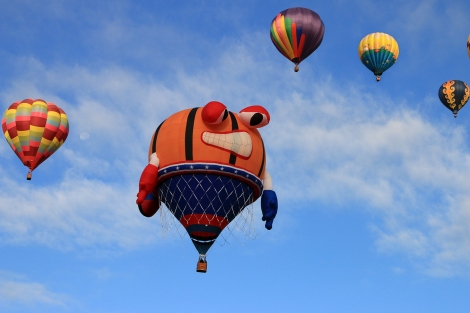 Check out my Flickrstream for images that don’t overlap with the selection in this post.  I set up an album there named, Balloon Fiestas; use the link on the right sidebar to jump into that space in another window!