At Balloon Fiesta, hot air balloons launch only when the weather permits it. In the early morning–and we are talking 4:30 AM onwards–hundreds of balloon crews and thousands of spectators are standing around in the dark anticipating a decision about the weather. We are at the launch field to enjoy Dawn Patrol.

Dawn Patrol is a small group of selected balloons that launch prior to sunrise on the days of Mass Ascensions; when 500+ balloons lift off from the Fiesta Park.  Naturally, everyone hopes for a go-ahead. Over the course of 9 days, it does happen that winds are determined to be too high and launches are postponed or called off altogether. Fortunately, this didn’t take place on either of the mornings I went to the launch.

Balloon Fiesta 2014 | Helicopters encircling the airspace over the field made cool rings of light above the chase vehicle parked in the grass. | Bulb exposure: 90.1 sec; F/16; ISO-100; 18mm

During this pre-dawn time, I scouted for places where I expected to see crews in action before it was obvious where the Dawn Patrol balloons would be inflated on the field. This was a terrific opportunity to set up my tripod and use my cable release. I made some of my best photos from the entire event in these hours of darkness.

Even in the pitch dark there is a tremendous buzz of activity going on. Crowds milling around the food vendors are drinking coffee or hot cocoa. On the field small clusters of strangers become acquainted and discuss from where they came.  Albuquerque visitors inquire about local spots to have breakfast after sunrise. It’s a introverted mixer where everyone is friendly when they are approached.

Some ambient light seeps in from the distant parking lots and shuttle bus zones. As balloon crew trucks drive onto the grassy field, their headlights and tail lights produce beams in the horizontal plane.   Sometimes you see a glimmer of flashlights (most often at the port-a-potties) and green or blue site markers that plot out the grid on the launch field. You do see the glow of phone cameras, tablets and LED camera screens while some people make early attempts at long exposures in the dark. You also see some toy lightsabers and glowsticks being waved around by half-asleep children.

Impressively, balloon crews set up the first wave of hot air balloons while it is completely dark. They wait for an official go ahead over a loud speaker. Once it is determined that the winds are favorable, and a thumbs up is issued, a small ceremonial group of hot air balloons take to the air in the pre-dawn blue hour.

From a spectator’s point of view, the wonderful aspects to the Balloon Fiesta are numerous. Foremost is that the atmosphere is exuberant and open. It’s expected that we go right onto the launch field to get up close and personal with balloon crews and pilots as they are setting up the equipment.  We don’t have to sit in a stand, thousands of feet away from the action. We can observe and take closeup photos respectfully without getting in the way. 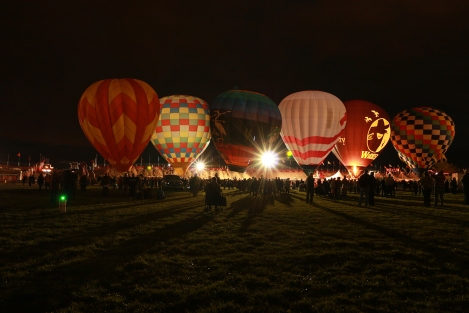 Second of all, if we attend a morning session at Fiesta, we can wake up at 3:30 AM dress and drive to catch a shuttle bus to the park, to find a spot on the launch field, to get up close for the Dawn Patrol.  Once these early birds launch successfully in the pre-dawn blue hour, the rest of the hot air balloons take off in waves. It all happens by sunrise.

Balloon Fiesta 2014 | Hot Stuff: Testing Out The Jets — You better believe that he’s wearing protective gloves! This provides a better look at the burner supports and the wicker basket before it’s attached, with guides, to a nylon balloon envelope; the special shape that fills with hot air.

A) Dress in layers. You will be standing on a grassy field, in the dark, in the desert where the land doesn’t hold in any heat over night. Before the sun rises, temperatures can have dropped to as cold as in the thirties (degrees F). You will want a backpack to peel off your layers and produce your sun hat and sun glasses once the sun rises and warm things up.

B) In advance, purchase Park ‘N Ride Tickets, plan to drive to a satellite lot, park and get on board a shuttle bus by 5 AM.  It’s *totally* worth the small extra fee. You will not have to sit in traffic, find a parking space near the park (which costs more than admission) and risk being turned away if lots are full. You will be able to get an easy, quick ride back to the parking lot when you finish at the morning session; the lines move fast and there are plenty of shuttles in queue.

C) Along with a pre-packed camera, remember extra charged batteries and memory cards.  Take a tripod if you have one. If you have a cable release for bulb manual exposures, take it. You will have lots of interesting opportunities to make some cool shots with light trails before the sun comes up.

D) There are food vendors selling hot cocoa, coffee and breakfast burritos among other event related curiosities. Pricey, but convenience has a cost.  You can bring your own snack and thermos.  Forbidden is glass and alcohol. Bring an ID if you insist on heading to a tent for some beer later on.

E) Take lots of photos! Get out there and enjoy the Fiesta.