To watch hot air balloons launch at a Morning Ascension, at the Albuquerque International Balloon Fiesta, one has to get to Balloon Fiesta Park in the dead of night. Actually, the wee hours of early morning before the sunrise. For a photographer, a tripod is a requirement and a headlamp will be helpful, too.

The long exposure challenge in capturing hot-air balloons being filled up in near darkness, is that the subjects are moving. Motion blur is imperceptible to the eye, but picked up on the camera sensor. In today’s post, we will consider two approaches used to capture the same subject in dim lighting conditions.

Method one: freeze the moment with a relatively fast shutter speed and a maxed-out sensor ISO.  Yes, the dark image required that I remove a lot of resulting “noise” in the post- process development.

Method two:  attain softness and motion blur by using the lowest possible ISO combined with a long shutter speed. Here the the final image resulted in rich colors, as well as ghosting of humans moving around in the foreground.

The two resulting images of the same subject are presented below. They were taken less than one minute apart and made on two different cameras, one with a cropped sensor, and the other with a full-frame sensor.

First, we see the still life with human silhouettes and a dark background: 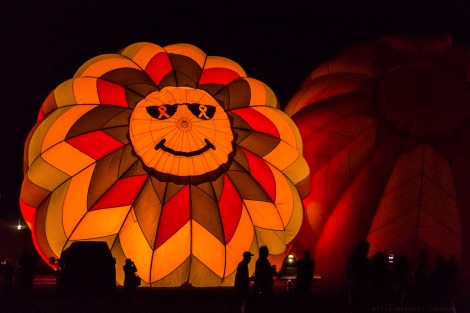