After photographing the morning launch of several hundred hot-air balloons, I departed from the grassy field and walked along Main Street, the giant pedestrian lane lined with vendors of food and event memorabilia. Eventually, I reached the children’s amusement zone. Along the way, I took some candid street photos. It was in this area that I encountered this subject and her friend. 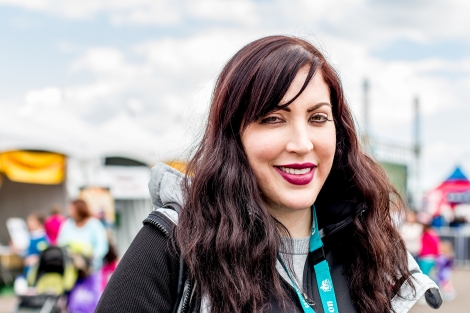 Stranger 78/100 is Cassandra, a 25 y/o mother of twin 4 year-old boys. Bless her stamina. Her arms were laden with donut vendor boxes and she was trying to reign over her high-spirited children. Cassandra was standing with another woman, my next stranger, who held eye contact with me for longer than a glance. I interpreted the “Look” as an openness to be photographed with consent; so I approached the pair.

Cassandra agreed to be photographed first so she could get back to shepherding the boys. We moved to the side of the pedestrian path, and while doing so she described herself as, “Caring. Nurturing. Persistent.” I crouched a bit and aimed up at her to provide a background that included both our location’s context and some sky for cleaner space.