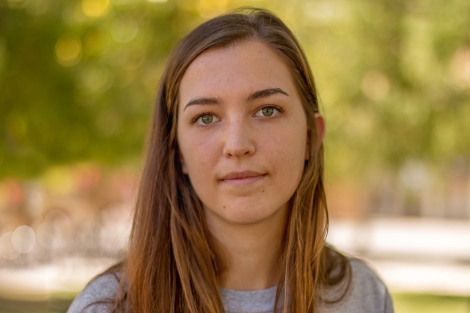 I had a personal errand to run on the UNM Campus and had extra time on my parking meter to find a stranger. It was a lovely sunny day, and 1:30 PM. I walked to an area that was an obvious crossroads of people. I observed pedestrian traffic, fast moving bicyclists and skateboarders. I did a scan of the area for people who were already walking towards or sitting in the grass and in the shade. That’s where I saw my next stranger. She was about to put on a pair of earbuds after pulling out a notebook to begin reading. I didn’t wish to interrupt her once she started to read, so I immediately approached her.

I kneeled in front of her and introduced myself. I explained the project and asked if she had time and an interest in participating. She agreed, saying that she had some friends who were photographers and admired a project like this.

Meet Chloe, 68/100. She is a 19 y/o, undergraduate Biochemistry major at UNM (University of New Mexico). When she was five years old, her parents moved the family from Los Angeles to Taos, NM. She still has family in the LA area and enjoys visits there because the pace and scenery is so different from New Mexico. When Chloe goes back north on holidays and breaks, she takes advantage of the mountains and enjoys hiking and skiing.

Though Chloe is only a sophomore, she has worked out a plan for her future. It will begin by attending pharmacy school and lead to formal clinical research on non-western/ holistic medicines. Knowing that entrance to a pharmacy program is very competitive, she’s focused on earning top grades and proving her mettle. When asked about how she relieves stress from the intensity of her studies, she told me that she enjoys running and socializing with her with friends. Chloe also explained that she was in the middle of a 5-week training to volunteer for AGORA, a campus affiliated crisis hotline. It’s part of the national suicide prevention network.

I asked what she was about to listen to on her earbuds. It was a group named Los Lonely Boys. She said it was a band she’s a fan of; that she’s seen in a few concerts in Taos. The particular song next up on the playlist was named, “Heaven.” Chloe said it seemed appropriate, based on how she shared her volunteer interest. She recited a stanza of the lyrics to me since I’m not familiar with the song:

“I’ve put in perspective that greater things are going on in life than my small worries. I’m learning how to stop stressing about small details. I appreciate that I have the luxury of being able to worry about trivia, like a “B” in O-chem [organic chemistry class]. My volunteer training will help me lend a non-judgmental ear and appropriate emotional support to people in a crisis, whatever that may be.”