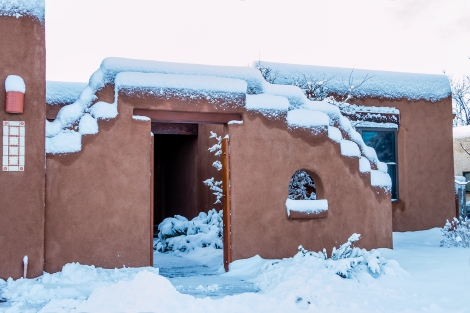 Immediately after one of our winter storms, I took a walk to look for some scenes with the white stuff. I saw this very freshly fallen snow on an adobe home. The fluffy snow cleaved to the walls and revealed the architectural design that is distinctively southwestern. The white snow makes a nice contrast against the adobe and it reminds me of powdered sugar.

A map of the United States is often needed to remind people that New Mexico is geographically located in the Rocky Mountains, not just on the border with the nation of Mexico, and three other western states (Arizona, Utah and Colorado).

We have established that the snow falls. But outside the highest elevations and in the mountains proper, the snow doesn’t stick around for long. When we get that white precipitation, one has to be quick to photograph the evidence.

One response to “Sugar-Coated Adobe”