Albuquerque’s community celebration of Dia de los Muertos, or Day of the Dead, was held on November 1, 2015 in the South Valley. The annual Marigold Parade is organized so people can assemble and celebrate the Mexican version of All Saints Day. It’s the day after Halloween. It’s a perfect way to walk off candy that was eaten on the previous evening during trick or treating!

A parade with personalized floats culminated at the Westside Community Center complex on Isleta Blvd SW. The neighborhood with its rock-solid cultural ties to Mexico, was filled with thousands of people paying homage to their loved ones, as is the custom of this holiday.

The area was closed off for pedestrian traffic and filled with photographers and revelers. Most people were wearing some form of calavera attire, myself included, which helped transform the experience and set the mind in the right framework.

The Quinceanera boutique made a colorful background

The belief is held that spirits of the dead visit the living during the celebration. Marigolds, real or artificial, are vibrantly colored and thought to attract (by scent if real) those visiting spirits to altars (ofrendas) to one’s dearly departed. The ofrendas are set up in private, and in public. Marigolds symbolize fragility of life. Tissue paper marigolds are prominent decorations for the occasion, as are skeletons of all sorts.

Phyllis, a stranger whom I met, took months to prepare her detailed float. She towed it with her pickup truck. Her float had it all: skeletons, skulls, sangria, marigolds, whimsy, and tributes to loved ones. 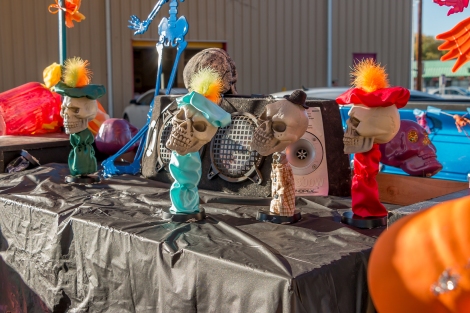 This is a closeup detail from onboard Phyllis’s float. Cheers, Leslie!

Headpieces made from faux flowers were worn by celebrants, and the stylized makeup was awesome to admire on so many faces. 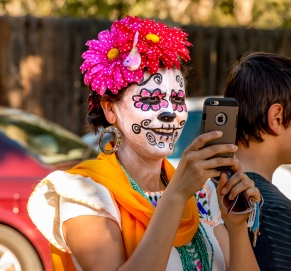 Bride of the Dead adorned with tattoos, elaborate headpiece, and calavera attire.

As a non-Catholic, first-time visitor to this cultural event, I was struck by the joy in so many people’s expressions. Weeks before the event, people invest time and care in their floats, attire, headpieces, masks and makeup all in anticipation of what I consider, a giant “hurrah.” 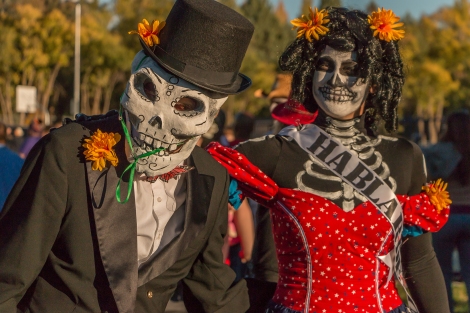 Some couples coordinated their calavera attire.

I made several portraits of strangers at the event, as well as lots of candids. You’ll see the stranger portraits in the procession from my 100 Stranger posts. So many exciting visuals were enjoyed and these highlights will carry me forward to the next year’s parade.