This is Scott, my 56/100 Strangers. He paints home numbers on street curbs for a living. 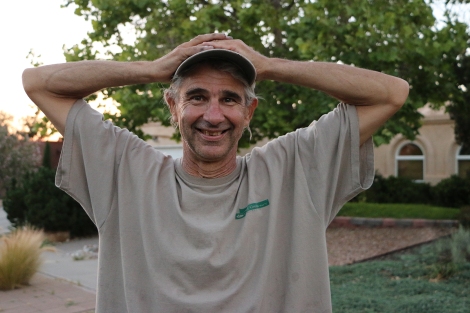 Scott rides around Albuquerque neighborhoods on a bicycle to scout for prospective customers: homeowners with faded house curb numbers that are hard to see. Scott rigged his bike with a milk crate to tote his spray paint cans dab cloths and home-made number stencils.

Originally, Scott started painting curb numbers because it’s what his friends were doing during the daytime. Scott runs a cash-only operation. He does a five-step-process and takes 30 minutes from start to finish. He only accepts cash payment in full after he finishes a job and meets his customer’s satisfaction. Scott prides himself on being meticulous. His homemade stencils, especially for zeroes and eights, have a more finished quality than generic stencils available for purchase at DIY home stores.

Scott rang our doorbell on a quiet Sunday afternoon to solicit new business. I accepted his proposal to repaint our house number on the street curb, on two conditions. He would have to: 1) permit me to photograph him for the 100 Strangers project; 2) explain his process and method while completing the work.

“I am proud of my work. I like doing it and being outside, but I haven’t had anyone interested in me before,” said Scott. “Usually, customers talk over what colors they want me to use and then go back into their supercooled houses. I’m used to being somewhat invisible, even though my finished work is the opposite.’

Scott agreed to be photographed for the project but lacked interest in seeing his picture, once it was taken. While we were waiting for one of the paint layers to dry, I made this photograph of Scott with his hands placed on his head. He held this gesture for long periods during our conversation. I considered cropping this tighter, which would have eliminated the triangle formed by his folded elbows. I decided on the medium shot because the pose gave us a view of his forearms and the sinews that are apparent beneath his skin.