I had no intention of buying bread at the Rail Yards Market. What I came for was beets and people watching. And then I reached a curious vendor booth that economized its space by featuring two independent businesses; one was Cloud Cliff bakery. 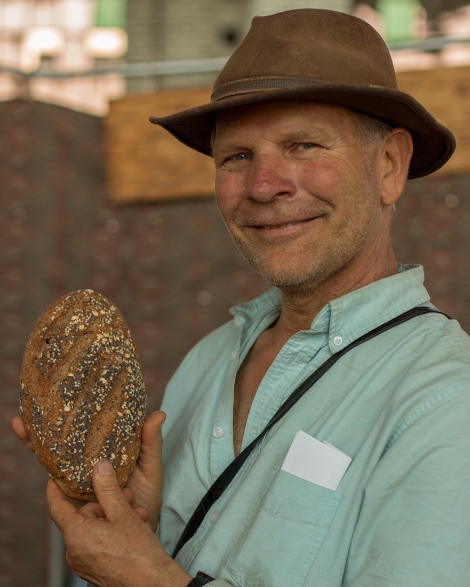 Placed carefully on the bakery table were samples of medium brown-colored bread covered with seeds. When I was invited to try a bite, I did. The taste surfaced a very strong sensory memory provided by Frau Gugl, my “host mother” from Salzburg, Austria; where I completed some studies in college. For breakfast, she served me slices of a similar tasting brown bread flecked with seeds and millet; it was covered with an extraordinary cherry jam; and washed down with a rosehips tisane. I would partake of this simple, but wonderful meal while looking through a small square kitchen window to a majestic view of the Untersberg; a massif of the Berchtesgaden Alps.

Yes, I bought a loaf.

A gentleman approached the samples. He asked the baker for the ingredients, while pointing at the loaf I was purchasing.

His voice was accented with a particular German. I heard it: Austria. My stranger antennae began telescoping up.

“This seeded one has amaranth, and…” the baker answered. I heard yet another European accent.

The customer confirmed for me that he was, indeed, from Vienna. “This! This is good bread.” He smiled, reached for another sample and stuck it in his mouth all at once. In a hurry, he pulled money out of his pocket and handed it over to the baker. His bread was promptly paper bagged and he disappeared into the market crowd.

“Darn,” I thought to myself. “There goes my stranger.”

His departure left me standing face-to-face with the baker.

“Yes, I bake wonderful bread. We bake in Santa Fe then go to farmer’s markets like this, and the Downtown Growers Market.”

“Where in Europe are you from, originally?” I asked.

“I’m Dutch,” he said. “I was a Buddhist monk 30 years ago. I traveled around the world and spent time at Tassajara [a Buddhist Zen monastery in Monterey, CA]. I learned to bake bread there, and now use recipes from The Tassajara Bread Book. It was published over 30 years ago. Do you know of it?”

“No,” I said. “The connection of bread with spirituality doesn’t surprise me, though. I used to buy bread from Trappist monks from the Abbey of the Genesee in Upstate NY. They bake bread and sell it to the public. Bread provides basic nourishment, but can be so much more.”

“Yes. More.” He said, “I left California in the early 80s and started baking bread in New Mexico. Everything we use is organic. It’s good for the environment; it work towards what is sustainable. At Cloud Cliff, we only use locally grown flours in our bread.”

“Willem,” he said. “And yes. There is a strong connection with use of hands to work our minds. I’ve seen incredible moments with cognitively impaired adults who come and bake with me. I watch them relax and become purposeful while handling the dough. It’s very therapeutic. It is because of the connection of the mind to the hands; the hands control the mind. In modern society we shouldn’t forget how to use our hands.”

I asked if Willem would agree to be photographed for the 100 Strangers project.

“May I hold a loaf of bread for the picture?”

“Yes, as long as I can see your hands, too.” I then asked, “Has anyone told you that you resemble the character of Indiana Jones [as portrayed by Harrison Ford, the actor]?”

How hard it was to believe. In any case, I needed only a few clicks to get Willem’s eyes in focus. He posed as a natural. Then we were done. I thanked him, my 53/100 strangers.

He handed me his card. Below “Cloud Cliff,” it says, “Bread Art Performance.” It also lists “kanseki” as a name under which Willem publishes documentary style movies that he produces; Vortex Politico is where he blogs. Willem is so much more than a baker.