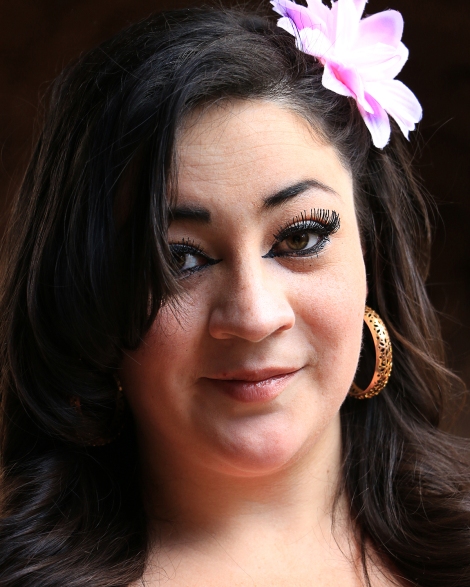 Surfing on my elation of having just made some decent images of flowers and people who grew them (strangers 10-13), I entered an area of the Albuquerque Botanic Garden where children run like beasts through a maze of vegetables of gigantic proportions.

Christina with her daughter crossed my path at a large carrot. I noticed that she and her daughter were wearing flower fascinators, and I stopped in my tracks. I practically curtsied and asked to photograph them for the 100 Strangers project.

Christina is an exuberant new mother. Her little girl, 9 months old, is the obvious apple of her eye. She was very surprised that I asked to take their picture. It excited her immediately. Christina agreed with a squeal, “YES!”

I suggested we move out of the path of the maze runners. We walked a few paces to an alcove away from hectic foot traffic. I did my best to direct her into the light at the opening of what resembles a cave with giant hatched eggs. An appropriate scene for a new mother. 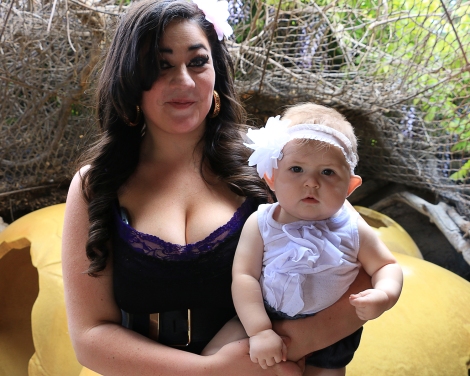 First I made some photographs with the pair

After satisfying myself that we had some winners, I asked her if she would permit me to make a portrait of her alone. Most flattered, she agreed. This is the results of our extra few moments of Mummy time.

She gave me the spelling of their names, and the most complicated email address I have ever seen; it had a mixture of all sorts of punctuation marks in it. I thanked her and we parted ways. The encounter was as quick as the time it took to read this narrative.

When she received the pictures, she was most pleased. He reply was a gush: “Thank u so much 🙂 i have the one u took of just me i love it. I love the picture with us together! Thank u sooo much.”