Today we experienced freaky severe New Mexico weather.  Extremely foreboding dark skies, with a smattering of lightning in unpredictable places, accompanied by heavy downpours. In the early afternoon, I watched the delightful documentary: Bill Cunningham New York  (2011) about the candid street\fashion photographer from the NY Times. I admire the tenacity of his work and enjoy listening to him speak in his Boston accent about fabulous and elegantly dressed women who appear in his “On The Street” Times interactive videos. In the film, he is recorded while accepting an award. In his humble speech, he said something to the effect of: “Those who seek out beauty will find it.” That stuck with me.

I left the kids with dad to run an errand, and hopped in the minivan. I heard thunder, and started to see some rain. At our altitude we got a bombardment of hail.    The sound of ice balls on one’s windshield can be rather alarming when you are expecting only rain. What fell were 15mm, marbled-sized ice balls.  Not very picturesque by the time I parked my car.

When I thought the coast was clear, I took advantage of husband being home with the kids, grabbed my camera, and briskly hustled through the park to the other side of the arroyo, using the footbridge. I was following the light.  It lead me to a neighbor’s front yard where I was stunned by the beauty of a plant that I have yet to identify. I had to shoot it. I’m fairly certain it’s not a delphinium, because the leaf shape was elongated.   The drops of moisture on the flowers are from the freshly fallen precipitation, not a sprinkler. The color was fabulous. I sought out beauty and found it. 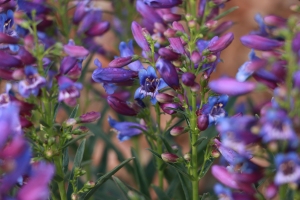