A group shot of this year’s carved pumpkins, glowing on Halloween Eve. 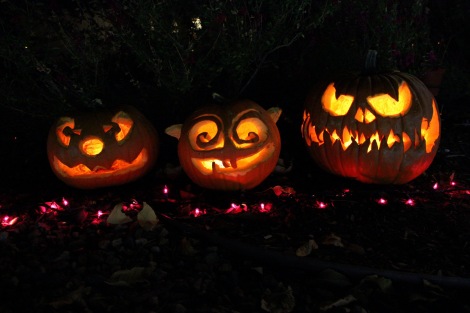 Last year I carved up a jumbo Jack O’ Lantern and felt I had outdone myself.  I set the pumpkin on the front yard, lit its candle, and then went inside to retrieve my camera to record a picture of it. But I never made that photo.

I couldn’t have been away from it for more than 2 minutes. It was, disappointingly,  time enough for a trickster to hijack my impressively carved pumpkin and disappear with it into the Halloween night. That sucked.

At twilight, my children leave our mildly decorated front yard to embark on the hour and a half quest to ring-and-reap for candy in our neighborhood.  Once their booty sacks are heavily laden, they head home in the pitch black darkness.  Their path is illuminated by flashlights, a few street lights, and occasional decorations in front of neighbors’ homes.  What would seem ordinary to them upon departing would seem extraordinary upon arriving again.  Re-approaching our home, the glowing faces of Jack O’ Lanterns would evoke awe as they would become transformed into eerie, otherworldly spirits.

When that selfish someone stole our carved pumpkin, my children were robbed of their momentary experience of suspending disbelief and entering a realm of fantasy and psychological thrill. And you can’t get childhood back.

In the week leading up to this Halloween, I ran a straw poll of social media friends and solicited whether or not to bother with Jack O’ Lanterns after last year’s mishap. Someone urged me to enjoy quality creative time with my youngest, carving up a pumpkin, and setting it outside for her enjoyment. Another suggested I place the pumpkin lanterns close to the front door: so a thief would think twice before attempting to remove them from our property.

I still had a chance to provide my youngest child with some memory-making. With only a few days before the holiday, most retail establishments were marking down the pumpkins remaining for sale.  Instead of one pumpkin, I selected three of them. My littlest picked out her favorite of the bunch and gave me directions on the face design to carve. It is the leftmost face in the photograph above.  The other two were carved using my own imagination. Adults need play, too.

This year, my two eldest neither bothered with costumes nor did they go trick-or-treating.

First-born went to a friend’s house to play the sophisticated strategic card game called, Magic: The Gathering. The game premise is that one plays a powerful wizard, called a planeswalker, who summons creatures, spells, and weapons to aid in the destruction of other planeswalkers. On any given weekday, my child and his friends play Magic during lunch in their school cafeteria. They were enchanted by the idea of playing together on Halloween evening.  Afterwards, he reported back it was, “the most fun Halloween. Ever.”

The second-oldest dutifully remained at home to complete homework.  What could be more of a sign that one’s childhood is over than having homework assigned on Halloween Eve?! For him, it was an ordinary night with the bonus of raiding his little sister’s candy loot.

Last night, my youngest child enjoyed trick-or-treating with her father. I remained behind to photograph the Jacks (((YYEEEESSSS!!))), and hold sentry at our front door with the candy for the trick-or-treaters. I sat in a blind created by the column to the side of the entrance.  I could see clearly everyone approaching the house, whether it be for a trick or a treat. Surreptitiously, I overheard positive comments visitors made about the pumpkins.  That was my treat.

Eventually she came back to our house in the darkness after collecting her candy and having been scared out-of-her-wits a few times. As she padded the walkway to our door, she paused and admired our Jack O Lanterns. Before noticing me, she exclaimed, “WOW!” And, “Ooooh!”  while pointing at the lantern faces. That was most gratifying.

When the last visitor for candy was gone and the candles inside the pumpkins were self-extinguished, I couldn’t have cared less if someone were to jack the Jacks. And by that I mean, lift and pilfer. This morning after, they were still in our front yard.