We met on a chilly Autumn morning 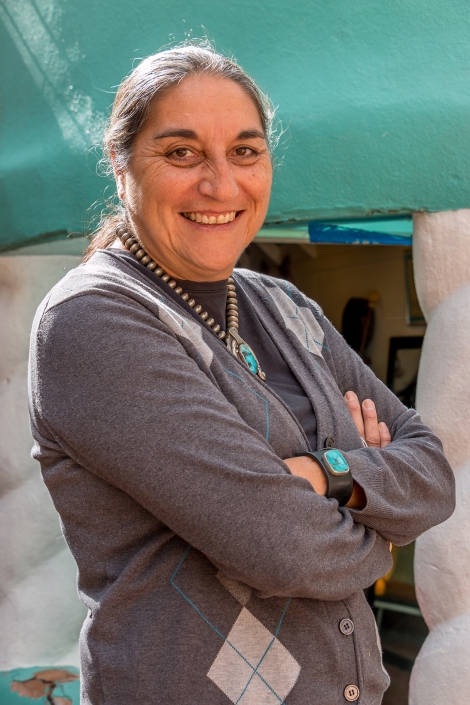 I went exploring Albuquerque’s Old Town with family visitors who were shopping for a dream catcher. When we reached San Felipe alley, I observed interesting light playing on the adobe walls and started taking some photographs. I heard the bristles of a straw broom being swept over the brick walkway to a turquoise colored gallery entrance. The person doing the sweeping was my next stranger.

Meet Gloria, my 85/100 strangers. Gloria Valencia is a contemporary jeweler with a studio gallery named, RedEarth Spirit. She had a roaring fire stoked in her corner fireplace and was in the process of opening shop for the day when we had our encounter.

Gloria told me she was originally from Santa Fe, and has Spanish and Yaqui blood lines in her family. She moved to the Pacific Northwest for several years and then moved back to New Mexico to open her gallery in Old Town, in 2013. I asked how she became a silversmith.

“When I was six, a medicine man put a silver ring on my finger,” said Gloria. “Ever since, I was fascinated by silver. In Vancouver, I met an Argentine who apprenticed me in silversmithing for 4 years. I spoke Spanish and we got on well.”

I asked if she had any message to impart to her younger self, now that she was operating her own business.

“Follow your inner voice and don’t give up,” said Gloria. “Follow intuition and everything, even financially, will work out. Things fall into place. I lost that silver ring. It got me going and here I am today.”

Gloria is 5’11”. I’m six inches shorter and in photographing her, I worked a few angles until I was satisfied with eye contact more level with mine. I asked if her height had been an issue for her socially when she was a teenager.

In Gloria’s portrait there are two dramatic jewelry pieces, her own creations, seen on her wrist and around her neck. The leather bracelet has a piece of turquoise set in silver, and the necklace is her modern take on the Naja design of a squash blossom. These are representative of her style and current work with semi-precious stones, silver and leather.

Those far from New Mexico unable to drop into her studio can pay a visit to her updates on Facebook: www.facebook.com/GloriaValenciaJewelry/?fref=ts  She often updates her page to show her new creations, such as leather wrist cuff, and materials being worked on, like fresh river turquoise.