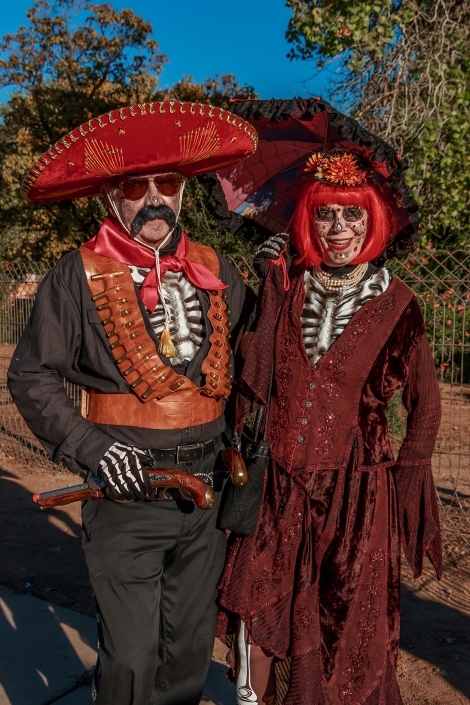 This is Maryann and Chuck, my 81/100 strangers. The couple was captured as Dia de Los Muertos celebrants at the 2015 Marigold Parade in the South Valley of Albuquerque, NM.

If you follow us at Snapammas, you already may have seen many of the portraits I created from that event. Check out the archives in January 2016 for the lot of them. Here is a link to a post that featured other costumed couples.

After the Day of the Dead parade was over, I walked towards the Westside Community Center. It was after 3:30pm, and I decided to have the sun on my back and risk having some flattened–but even–light working to my advantage for street candids. I walked by hundreds of people who were departing from the festivities at the community complex.

This couple and I had our brief meeting on a street corner. When I asked for permission to capture them, it became a mob scene. They were made up and wearing superb calavera attire from head to toe, with period finery and props. I complimented them on their outfit details and asked to make a photograph. They agreed and gave me this pose without any direction.

Chuck in the sombrero and ammunition vest with a pistola never uttered a word during our encounter. Maryann with the parasol did all the talking. She said that this wasn’t their first time at DDLM. During the rest of the year she works in IT (information technology).

Surprised I was to learn that none of the other photographers who had already snapped them that afternoon had asked for their email addresses to share the resulting portraits.

“Let me be the first,” I said. Maryann was grateful to have a photograph that preserved her appearance and memory of the event.

With the growing attention we were garnering, I had to act quickly to make my shot. This being street photography, I accepted that I wasn’t going to get my way free and clear. So many folks with phone cameras couldn’t resist the same chance to gawk at and snap this couple, too. Maryann and Chuck soaked up the attention. I cropped in camera to cut out the black shadows cast upon the ground and their feet by all the other gawkers.