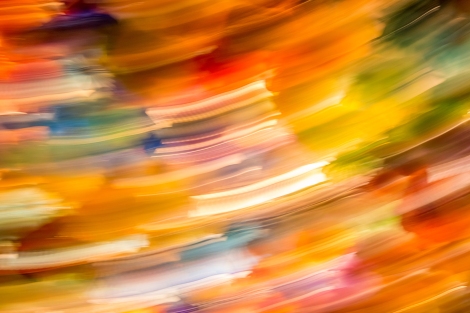 This is my favorite of several light paintings I made of Dale Chihuly’s glass installation, famously located in the magnificent lobby of the Bellagio Hotel and Casino.

This image is a deeply visceral response to the virtuoso work of grouped glass forms, arranged on the ceiling, and lit from behind. Looking at my results, I was reminded of the artwork  and sound from The Cocteau Twins’ 1990 LP, Heaven or Las Vegas .

With gratitude, I received an incredible positive response to this photograph on Flickr. It was picked up to Explore; to date it has been viewed over 13,500 times.  I am very touched that this non-representational image received kind words and praise, and that it generated so many views.  I haven’t decided on the size to print out this image, to hang it on a wall, but I know it will be big.

—
Cocteau Twins were a Scottish rock trio (1979 to 1997) most notable for conveying the unearthly soprano vocalist named Elizabeth Fraser. To give you an idea of their sound, here is a sample video (with bokeh!). Their music was distinctive and described at the time as “ethereal goth;” which begat a music subgenre now called “synthwave,” “darkwave,” “shoegazer,” or “dream pop.”

One listened to their LP records (or CDs) from start to finish; single songs just weren’t enough! They were a posterchild for 4AD, a British independent record label that packaged albums with visually distinctive identities that incorporated abstract images like my photograph above.

2 responses to “Heaven or Las Vegas”