In the west, we need water to drink, to farm, and to generate electricity. The Colorado River and its tributaries make up a vital resource that contributes to those ends. The Colorado passes through 7 western states (Arizona, California, Colorado, New Mexico, Nevada, Utah, Wyoming) before making a short appearance in Mexico (in Sonora and Baja Califorinia) before reaching the Gulf of California.

The Colorado River divides at Lees Ferry, a point in the mainstem about 30 river miles south of the Utah-Arizona boundary. We visited this area in August 2014. I photographed in this amazing wild area and you can visit my Glen Canyon album on Flickr.

One of the destination points for people visiting the west is Lake Mead and the Hoover Dam, which is fed by the Colorado River. When full, Lake Mead, is the largest reservoir in the United States in terms of maximum water capacity. It is about 24 mi from the Las Vegas Strip, southeast of the city of Las Vegas, Nevada, in both states of Nevada and Arizona.

After 15 years of record low water levels, Lake Mead has been shrinking, and it reached it lowest point in June, 2015.  We saw the low water line with our own eyes (and my camera) in December 2015. It was our first time visiting the Hoover Dam, and the experience, for me, was a complicated mix of excitement and woe. The reservoir is down 147 feet from when it was at full capacity in 1983. It’s currently 38 percent full.

At the Hoover Dam, I was reminded of the challenge of photographing a totality of an enormous project that features multiple man-made, engineered structures set inside the natural world. Some of my highlights from our visit are here to show you what I mean.

Visitors drive to Black Canyon, 30 miles Southeast of Las Vegas to reach the Hoover Dam. Cars pass through a security gate checkpoint where guards will inspect inside, beneath and on top of one’s vehicle to insure it’s not toting potentially threatening items that could cause damage to the structure or people who are visiting.  I will not name those dangerous items here, and will rely on your imagination and common sense to connect some dots here.

The Hoover Dam is not only a functioning piece of incredible human triumph of concrete engineering and water management. It is also an immense site of American history. Constructed during the Great Depression between 1931 and 1936, President Franklin D. Roosevelt dedicated Hoover Dam, September 30, 1935.

Hoover Dam generates, on average, about 4 billion kilowatt-hours of hydroelectric power each year for use in Nevada, Arizona, and California – enough to serve 1.3 million people. From 1939 to 1949, Hoover Powerplant was the world’s largest hydroelectric installation; today, it is still one of the largest in the United States. You can read facts about the power it generates, the locations served and other details, with a visit to this page from the Bureau of Reclamation.

Who says that infrastructure can’t be beautiful?

Side View of the Enormous Bowl which rises nearly 20 stories high.

The hydro-electric powerplant is located inside the U-shaped structure at the base of the dam. Each powerplant wing is 650 feet long (the length of almost 2 football fields) and rise 299 feet (nearly 20 stories) above the powerplant foundation.

VERTICAL PANORAMA: So enormous a view, this was made by stitching together 2 images shot at 10mm!

Four reinforced-concrete structures, intake towers, are located above the dam, two on each side of the canyon. Details on the Bureau of Reclamation website are that, the diameter of these towers is 82 feet at the base, 63 feet 3 inches at the top, and 29 feet 8 inches inside. Each tower is 395 feet high and each controls one-fourth the supply of water for the powerplant turbines. The four towers contain 93,674 cubic yards of concrete and 15,299,604 pounds of steel.

My eldest son asked me why the rocks were white and in such a strait line all along the canyon walls in the photo below. I said, “Unfortunately, that is the high-water line.  We are in a drought, and the water is very low.” It’s one thing to read the news, it’s another thing to see it for yourself.

Tower Designs Reminded Me of Daleks from Dr. Who.

When the Hoover Dam was erected, Art Deco was the popular style of the time. It seeps into the engineering design as much as it is reflected in the ornamentation present around the entire site.

For example, facing the dam, on a platform of black polished dionite, are two enormous sculptures 30 feet high, poured from 4 tons of one continuous stream of molten statuary bronze.  They were designed by Norwegian-born, naturalized American Oskar J. W. Hansen. Visitors rub the toes for good luck (I did it, too) which polishes them to a shine.

“Winged Figured of the Republic” by Oskar J. W. Hansen

While working dangerous construction jobs in the building of the Hoover Dam, the official record is that 96 men died. Hansen commemorated them with a bronze memorial plaque in Art Deco style. 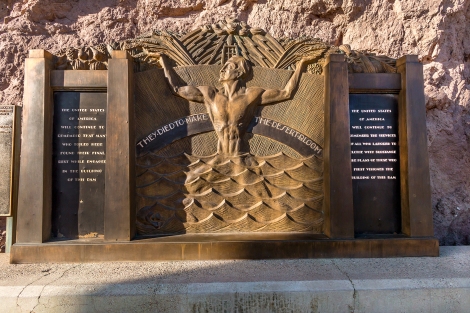 The art deco details extended even to linoleum patterns observed on the floors of the pedestrian bathroom towers atop the bridgeway.

People using the loo had to climb an additional stairway to reach the second floor washroom area. Everyone passing to or from the toilets got to walk on this large inset design.

With photography, sometimes we have to look up, over or down to make images that capture the majesty, prowess and artistic work of others.