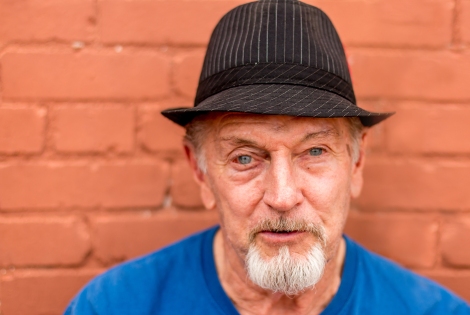 After completing a fine series of pictures with a stranger, I left the main building at the Albuquerque Rail Yards Market.  Stationed at the front area was a fellow who reads tarot cards. To the side of his booth was a bench upon which three friends were sitting. They were unwrapping foil on some ears of roasted corn and testing out whether or not the ears were too hot to bite into.

Despite their advanced age, they were high-spirited. I was drawn to them as an observer of their warm camaraderie and wanted to learn about their experience at the pop-up market. I walked up and introduced myself and explained that I would be pleased to photograph them while their corn was cooling off.  They were receptive to participating in my stranger project and overcome that I would want to talk and take their pictures.

I had my 50mm lens on the camera. To place all three of them in the same frame would have required standing so far back that I would have run into the crowd of people watching and waiting for the fortune teller. Therefore, I made individual portraits in a succession. I began with the gentleman, because his two female companions wanted to freshen up with lipstick.

Meet Tex, who is my 65/100 strangers. He was wearing a pin-striped black fedora and had tailored facial hair formed into a handlebar moustache and goatee. I’ve seen much younger hipsters sport such accessories. Tex revealed that he was a few months away from his 80th birthday. Originally a Virginian, Tex relocated to Albuquerque for retirement. He was keen on explaining his name to me.

Tex’s father named him after the favorite actor and singer named Tex Ritter. He famously appeared in a stage production that eventually became converted to the musical named Oklahoma; also was the father of deceased actor John Ritter. I asked Tex if he meant the same John Ritter who starred in the TV sitcom “Three’s Company,” which ran in the late 1970s- 80s. It’s about a guy living platonically with two women. Tex said, “Yes, that’s the one. But I don’t live with these gals here, I just run around town with them.”

A common problem experienced by babies and aging people is that of watery eyes (Epiphora). It’s caused by blocked tear ducts. Tex suffers from this condition, and I didn’t want him to feel self-conscious about it. I tried my best to focus on his beautiful blues in between wipes with his hankerchief.  After four or five takes, I was able to move on to one of his companions who had readied her lips and was waiting for me.