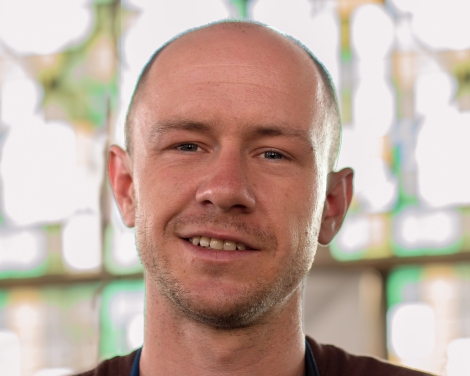 Say hello to Aaron, 51/100 of my strangers. This is the face of a young entrepreneur; a pesticide-free food grower from Corrales, NM. Aaron is the brother of  Elan (stranger No.50) and co-partner in Silver Leaf Farms.

We became acquainted on the summer solstice when I met him at the Rail Yards Market.

I walked an initial loop of the market vendors to size up who offered the best looking beets. On my first pass, I observed Aaron walking a 360 degree circuit around his booth. While purposefully arranging his product on the table-top, he wore a smile that conveyed self-contentment.

Aaron was attending his booth with his brother. When I approached their space, he greeted me with the smile in this portrait. From the brothers I purchased some of the best looking (and best tasting) beets that I’ve seen in years; not since regular visits to the Public Market in Rochester, NY.

The conversation stemmed out of the fact that his partner had the same name as my eldest son. That’s when he revealed they were brothers. We then shared a bit about our family histories. It lead to Aaron making sure I knew the spelling of his first and middle names. With our rapport established, I asked about their operations.

Aaron explained that with one other person they are growing on more than 5 acres of land over three seasons. They don’t organize a CSA. Predominantly they wholesale to a dozen or so fine restaurants in the Albuquerque/Santa Fe area. I asked how early they had to rise to set up for the RYM. He said that on the weekend, he doesn’t wake until 6:30 AM. Clearly they are well-organized and efficient, because everything was packed, driven over and set up by the start of market at 10 AM.

I had already worked a round of photos of Elan when Aaron agreed to be photographed and participate in my project. The challenges of light that I overcame with Elan weren’t an issue at all for picture making of Aaron. It’s possible that the sun outside the building had gone behind clouds while he stood still for me. The glare from behind the stained glass was more manageable. I only needed three shots to get my focus on his eyes.

Yes, I had tried to shoot a group portrait of the two brothers together at their table. My focus was off and the lighting, even with my fill flash, just didn’t give me what I was envisioning. I let them know that when I see them another time, I’ll do a second try to make a decent portrait of them together. Of course, by then they won’t belong in the strangers set!

Despite my self-frustration at not pulling off a group shot, I was pleased with Aaron’s individual portrait. The illuminated background from the stained glass embodies the vibe of our meeting; the hopefulness that comes from summer; I was lifted. It wasn’t just that Aaron and Elan offer the community wholesome fresh vegetables grown only a few miles outside of the city center. It was also stirring that they work in symphony for a common enterprise, and do it well. Cheers to you Silver Leaf Farms. Grow well and prosper.

Aaron’s portrait is just over the mid-point in my 100 Strangers project.  By this point, I have learned so much about my equipment, my quirks, my tenacity, and my vision.

But on an even more personal level, on days when I feel despair about current world events at the hate that people are showing towards others,  I can pull out of a hat this stranger portrait, or any other of my portraits, and revisit the story and my memory.

When I consider my photographs made of strangers it restores some of my optimism about people: the goodness in our cores; the beauty inside each of us; common motivations and emotions that we all share that can lead to greater understanding. We can, and must, place trust in strangers; we all need each other in this path of life. We share this planet and humanity’s future. It brings the world closer, not further apart.