Black swans are common in the wetlands of western and eastern Australia and its nearby coastal islands. This one happens to be paired up and enjoying an easy life at the Franklin Park Zoo, in Boston. 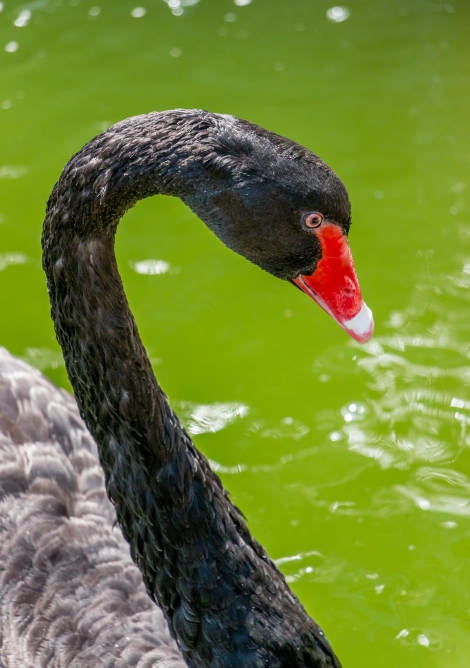 Strange as it seems to place live creatures on a landscape for ornamentation, I understand why a pair of black swans would be chosen. When a swan appears on a pond or moat, it lends a note of gentrification to the location. The site transforms into one with more perceived refinement. In a Victorian sense, it can boost the elegance of a venue such as the Franklin Park Zoo. 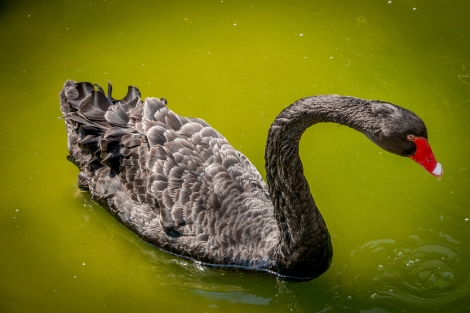 Not wanting readers to leave this page without having learned something, here are some nuggets to ponder.

Like other waterfowl, black swans moult after breeding. In fact, they lose all thier flight feathers so they’re unable able to fly for a month afterwards. They settle during this time in the safety of large open waters for safety.

Also, their curled tail feathers play a role in sexual selection and social dominance. The more curled feathers on their rump, the better the chances for attracting a mate and securing reproductive success. Here is a fascinating article from the journal called, Behavioral Ecology.

Animals inspire humans in more ways than one. Think about the 1950s hairstyles of a pompadour or a ducktail. These were clearly arranged in the effort to groom oneself to generate a more attractive appearance to a mate.  Sort of like a swan’s tail feathers.  The elongated curve of a swan’s neck also has inspired designers of “gooseneck” kitchen faucets. When I had to replace my kitchen’s broken faucet, I elected to install one with this design. It was practical, pleasing and stylish.

Beautiful design is all around us. We need only look to the natural world for  inspiration: such as the red and black color pairing or the elongated neck of a black swan.