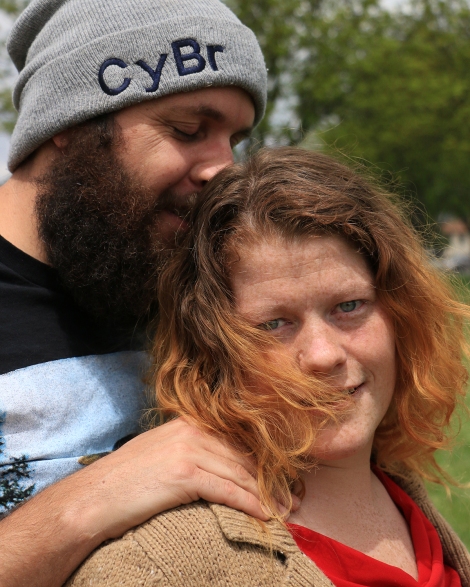 After taking Julian’s portrait (Stranger 18), I moved on to this couple. Forces of magnetism kept them locked. I realized they were going to be a two-as-one item, even though they do have their own stories. Meet Lee with the beard, and Briezy with the hair. They are my 19/100 in the 100 Strangers Project.

Lee’s son was playing soccer and Briezy was there as a supportive girlfriend. As a child of divorce herself,  the experience shaped her view that his son should be accepted as part of his package. She wouldn’t want to feel like an also-ran, so it’s a natural extension to enjoy activities with his son, too. Whatever they were going to do that Saturday, she wanted to make sure the boy was part of it. I told her that mature attitude would go far for her, and she appreciated the compliment.

When she told me her name, I thought she said, “Breezy;” the way it sounded. I loved that, and asked if her parents were hippies.

“No,” she said.  “I renamed myself to start fresh. My real name is Brienna.”

Briezy met Lee through a scene of friends. She thought Lee was 25 years old, like her. But it turned out he is 10 years her senior. Despite the age gap, they seem in tune with each other. Originally, it was her ombre hair in the sunlight that caught my attention when I noticed them on the sidelines at the soccer match.

Lee was wearing a T-shirt with a photo decal depicting a UFO with large block letters that read, “I Believe.”  His shirt design was blocked out while pressed behind her.

Lee and his sister, who is Julian’s wife, are a band together. They call themselves “Constant Harmony.” Briezy told me Lee plays all the instruments.  Lee described their sound as grungy like the 90s group, Smashing Pumpkins. He and Briezy spent a few moments comparing bookmarks on their smartphones to get me the correct URL for his band’s website. They never did get the words in accurate order, though they were in total agreement when they gave me the final hyperlink.  I heard back from Lee, who liked the photos a lot. He sent me a link to his latest release: <a href=”https://constantharmony.bandcamp.com/album/peace-virus&#8221; rel=”nofollow”>constantharmony.bandcamp.com/album/peace-virus</a>

I sent them this and another photograph where Lee was looking up into the camera. The latter felt more like a personal snapshot that they would enjoy. This candid image reflects my impression of their blooming romance and the muse that should inspire his artistic inspiration. Briezy’s freckles, eyes, and easy-going personality match the sound of her name.  I hope this couple works out.