Every now and then it’s a good idea to go back to your old images and pan for some gold. Search through images from 6 months ago or older. See if you can locate a photograph that you may have wished you’d done better. Give it a full critique. Then see if you can resuscitate it.

Perhaps all it needed was a new crop to change the focus of the composition. Maybe simply moving it from color to a black and white treatment can show you the gold that was there all the time. With some post processing time, you might be able to squeeze out some golden lemonade from what you once considered a lemon. 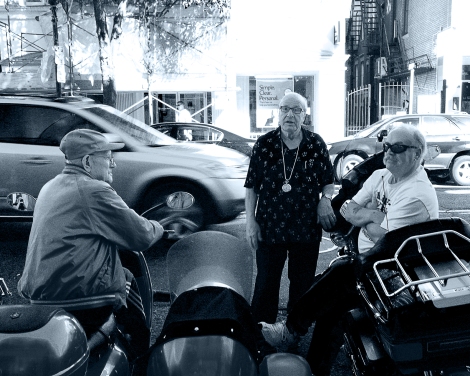 When I made this image, I was aiming to capture my encounter with these men and the general street ambiance of a neighborhood. We were standing on a busy sidewalk in the North End of Boston. I became engaged in a conversation with the fellow in the middle. He was loud, droll and somewhat wacky. The natural thing for me to do was to provoke him with a wise-crack to keep him rolling as a way to buy more time to take the shot.

Seeing the large watch hanging around his neck, I asked, “Do you have the time?”

In his accent he replied, “Whadda I look like tah you? The Time Keepah?!”

After returning home from my city visit, I chanced a view of the resulting image up close on a computer screen. I was utterly deflated. I shot the image in color and it was a really drab palette. I felt I had blown the moment. I didn’t like the motion blur of the car on the street that is pulling by. I was upset at myself for not getting any frontal face of the man wearing the cap, even though we had some banter.  But for all my disappointment, I resisted hitting the DELETE button. I just let it go back into the files…until a time when I could pan for some gold. That is now.

Since I made the image, I’ve clocked in a few hours on Photoshop to learn this and that.  I’ve looked at and considered thousands of street candids. Seeing small touches of motion blur in an image is more appealing to me now. The side profile on the man with the cap doesn’t bother me any more; in fact, I like it.  By leaving the image alone to smolder, I cut the emotional cord without losing the image forever.

My opinion is: at least where street photography is concerned, NEVER delete your images that aren’t total car-wrecks of exposure/focus/composition. You may be able to save them. When you revisit an offending image with fresh eyes, a positive attitude, and some recently acquired post processing techniques, you may find the reward you were after. It’s just delayed gratification.

I transformed the image from color to black and white, to control the contrasts, highlights and shadows. I went one step further and made it into a monotint. Finally, I refocused my composition by shaving off some of the moving minivan on the left side of the frame. Now, when I look at the image, I see a story unravel. I found gold.