Chanukah is a Jewish holiday familiar to non-Jews because of its usual proximity to Christmas. This year, the final night of Chanukah coincided with Christmas Eve. It made the Festival of Lights more exciting than usual. I called it Chistmukah.

Placing a lit menorah (the holiday candelabra) in a window for all to see is the traditional holiday decoration that’s expected for Chanukah.

During Christmukah (I love this expression!) I happened to be in North Miami Beach. Whereas the condominium complex where my in-laws live was once a Jewish owned majority, over time it has become tropics-loving French Canadian owned majority.  “Keeping up with the Gagnons,” is what I call their elaborate competition to light up condo units uniquely from those adjacent and illuminate building entrances with decorations to rival the neighbors.

I made these images to capture the scenes that embodied North Miami’s holiday spirit. 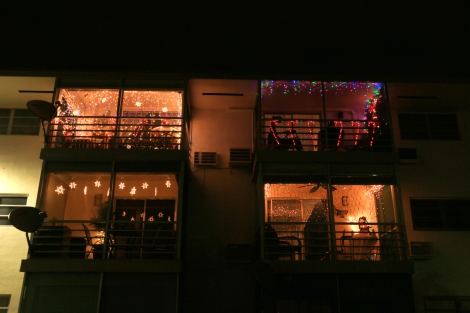 Christmukah 2014 | Keeping Up With the Gagnons 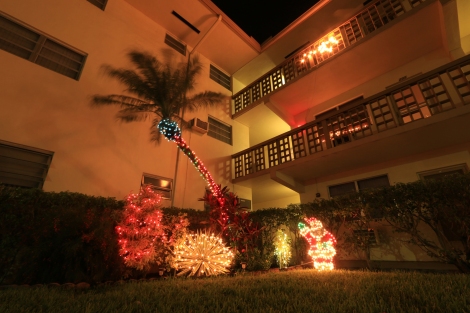 Christmukah 2014 | Tinsel and Balls In the Entrance Hall

Christmukah 2014 | In Need of a Solar-Powered Dancing Candycane

Christmukah 2014 | Where the Snowflakes Are Electric