Summer camp skits are life-practice for the eventual adult embarrassments of drunken karaoke.  Groups of children, moving like herds of cats, are directed to stand before an audience of half-receptive other campers, and sometime indulgent parents. They take turns performing scantily rehearsed amateur comic sketches or brief burlesque routines set to popular songs of the day. The setting could be a barn stage or gymnasium floor. The audience claps for each act because either they are finally over or because they were actually well-done.

My sister and I have always found amusement together watching children in the awkward moments offered to an audience, whether televised or in person.  I was thinking of her when I captured these moments. It would have been distracting to the kids if I were to use a flash. Instead, using the available natural light inside this gym, I bumped up my ISO to 3200 so I could use shutter speeds between 1/30 sec. and 1/100 sec.; not as fast as I would usually prefer for action, but they weren’t moving very fast.  It wasn’t a sporting event, but it was for spectators.

I don’t even remember the music that they danced to. I loved watching the joy, frustration and care in their exhibition and that they were wearing party-favor costumes.

Love Is An Open Door | My favorite is the chicklet in the grey boots and tie-dye top.

Boys have a totally different sense of themselves when in front of a crowd. One group turned on a rhythmic song and took turns busting a move. I enjoyed watching them watch each other.

Not Exactly a Hand-Stand.

Raffi’s group, named the Coyotes, did a parody of the baseball themed movie called the Sandlot. Never saw it.

Never Turn Your Back on the Audience | The green shirt reads, “Science Is Everywhere.”

Just Do It. In a towel cape, of course. And maybe even in Child’s Pose. 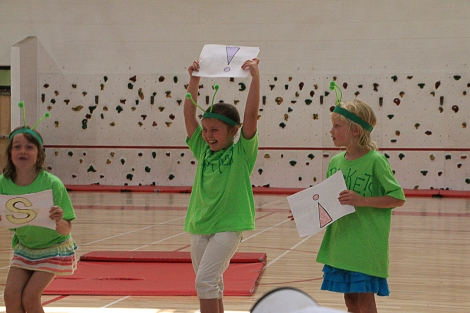 If they are lucky, at the end, awards are given out.

Sometimes there are moments of pure candid charm. And that’s why you bring your camera.

One response to “Rhymes with SKIT”