If you ever need full body exfoliation, go climbing at 7,000 feet above sea level on a sand dune in the summer in shorts and short-sleeves. The dune forming winds will whip and smack sand grains across you like sandpaper.  It smarts and is invigorating simultaneously, in a platza sort-of-way.  The sensation reminds you of the unstoppable power of nature’s labor in perpetual motion.  With photography, we try to do justice to a site that blows us away. Here are recent photos from a place that literally tried to blow me away: Great Sand Dunes National Park and Preserve.

Taken right after some rain, around the sunset hour. I captured 9 shots for this panorama; stitched them together in post-processing  to create this final image. Here is the view you will have as you drive along the flat long road into the National Park. This view really shows how the large 6 mile diameter area of sand dunes was created. Here we are overlooking part of the 50 mile diameter ancient lake bed that dried up. The sand all piled up in the corner along the mountain range. At the lake bed you are at about elevation 8,000 feet. Top of the dunes approached 9,000 feet, and the mountains off in the distance are in the 13,000 to 14,000 feet range.

Originally, our adventure to this amazing park was planned for Memorial Day weekend. When I called the Visitor Center for a park report on the water flow at Medano Creek, the ranger advised me to stay away for the holiday. His rationale was that already excessive car traffic in/out of the park from folks driving in from Denver; limited to no parking spaces, no campsites available within 45 miles, and too many first-time tourists treating it like Disney Land and using all the limited resources in the park would only get worse. The freakshow he described convinced me.

We rescheduled the road trip and thus spent the 4th and 5th of July in Alamosa County, Colorado taking in the sand, sky and wind. The Medano Creek, an attraction for sure in this land-locked area, is formed by mountain snow pack melt-off from the adjacent Sangre de Cristos mountain range. The water peaks from April through mid-June. By the time of our visit, it had unfortunately become a morning trickle. It merely created a muddy line in the sand to cross before hiking up the 750 vertical feet to the top of the High Dune.

Had I really thought things through, I would have taken some kick-ass kites along for the kids to fly. In this case, I did bring  them the surprise of batons with 8 foot-long reflective holographic  streamers; one for each of my children. They were a huge hit in the windy setting, and received lots of raves from other visitors of all ages, looking on jealously.

This is the largest, tallest dune in North America. The forces that created these towering sand dunes is an ongoing process that one can witness and experience today. Just over 400,000 years ago, sands were left behind after ancient lakes receded. They are blown by predominantly southwesterly winds toward a low curve in the Sangre de Cristo Mountains. You can see this range as they appear as the concentrated green-colored areas of my photos. These mountains rise in elevation between 13,000-14,000 feet.  The wind funnels toward three mountain passes causing the particles of sand to accumulate in this natural pocket.  Winds from the valley floor blow toward the mountains, but during storms the winds blow back toward the valley. These opposing wind directions cause the dunes to grow vertically. At the top of the High Dune we climbed to about 7,650 feet.

This panoramic view was made of 6 photos. I started taking the images on the left, by the couple walking their dogs along a path on the Sand Sheet Loop, and then panned continuously left to the tourists.

This location was  ideally suited for use of my wide angle 10-22mm lens.   The space and sky was so expansive. With my photos,  I did my best to capture overlapping scenery, so in post processing I could make a few panoramas by photo-stitching them together.  I knew there would be some good results if I could make the original shots worthy of stand alone photos, too.  Naturally, a photograph can’t replace the experience of being there, but I certainly tried to render what I saw, through my eyes. As it is hard to comprehend such a vast open space, I did make an effort to include people, for size reference of scale, when it was possible. 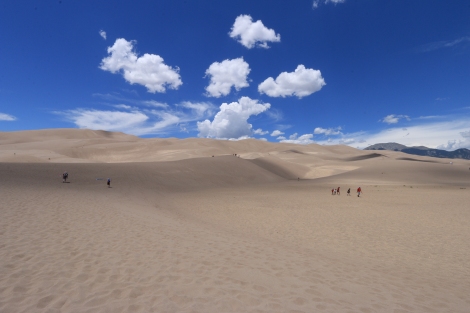 After crossing the Creek, you are met with a vast awesome stretch of sand that appears to rise and beckon you in.

Marching up a ridge on the High Dune.

That plastic orange sled, which my husband insisted on towing up the entire way, behaved better as a kite and wind-shielding-device.  We waxed it before-hand, though Elan was disappointed he couldn’t gain much momentum going down the inclines. He concluded that parabolic sleds are best suited for sand sledding after seeing them work in White Sands NP. From a few shops in Alamosa, along with the Oasis Campground/Restaraunt shop before you enter the park,  it is possible to rent wooden sand boards that are shorter than snowboards. While people seemed to have more luck with them, I am glad we saved the money and didn’t bother. 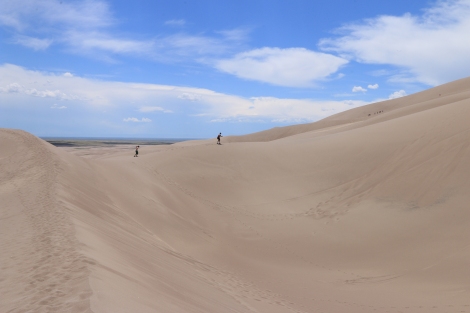 You can see the immensity of the dune by examining the people walking on this ridgetop, and even further on the right, several ridges away.

My husband carried the baby on his back all the way up. We stopped for a water break when nearly at the top, and she woke up, dazed at her alien surroundings. 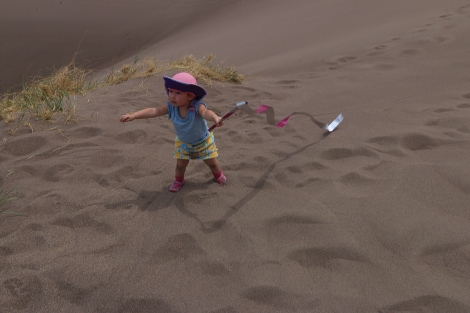 Where am I? I woke up from a delightful nap to find myself 700 feet up in all this sand. Where’s my bucket and shovel?

There isn’t a lot of dune grass along the way. When you do see the blades, the scant patches encountered seem like mini oasis points.  Actually, grass growing on a dune is the process that comes eventually after the peaks have developed. Over centuries, the sand becomes grass inhabited and sustaining. 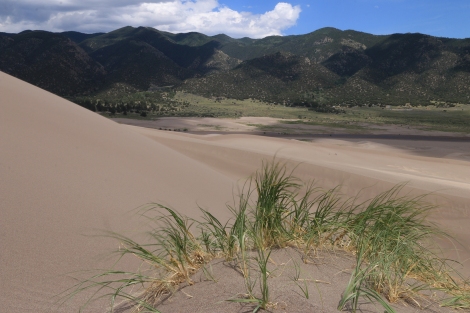 Wind in the dune grass at 700 feet above sea level. You can see that thin ribbon of the Medano Creek between the sand and Mountains.

Here was a good point to shake out excess sand and catch a bit of an oxygen and water break. Getting to the top of a dune is fairly intense physical exertion on a nearly vertical direction.

I do want to mention that WHILE we were hiking up to the apex, my husband told me I should have (THANKS for the afterthought) brought along a zip-lock bag to shield my camera equipment. It’s not a bad idea. The winds are not just blowing at you, they are moving grains of sand in the air at you and you can’t escape from the particles.

Panorama of 2 stitched images taken from the Apex of the High Dune. We reached the top for a quick water break, and then the kids started running down. No one wanted to hang out for a close up photo. They wanted out of the wind.