After I left the drumming circle at Summerfest, I sought out another activity or entertainment stage. I found an area several hundred feet from the circle, where an intriguing vaudeville-styled circus troupe was setting up. There, I found this stranger. 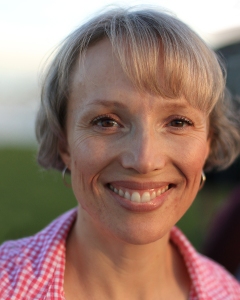 She was sitting on a blanket with five teens and a man, who I learned was her significant other.

She was wearing a cute hot pink gingham checked blouse. The sun was bringing out golden tones in her complexion and hair. My portrait alarms went off.

I had but a brief few moments to introduce myself; the project thrust; the ask with permission granted; and the photo-making. This is Carolyn, 46/100. We shared an enjoyment of the evening festivities so far with our children, and were curious about the act about to begin.

Carolyn was completely at ease. She was sitting with her family around her, the mood was lively around us, and it was a delightful summery evening.

With two shots fired on my camera, the live performers abruptly started. I abandoned hopes of further picture taking.

Finding Carolyn and making her portrait was like tossing back a glass of crisp pinot grigio at cocktail hour while zeroing in on hot appetizers being passed around at the other side of the room. Light and refreshing; gulped then gone.