On May 20, Flickr picked up one of my photos to appear on Explore. 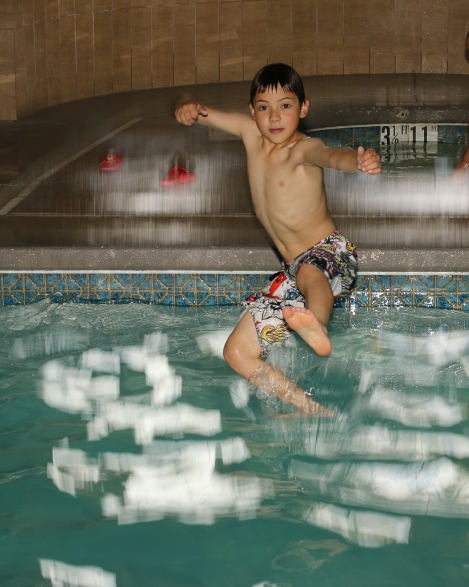 This action photo depicts my son who was having a blast at an indoor pool. He wanted me to make it look like he was walking on water. He jumped many times so I could nail this photo to his satisfaction. It was fun.

All the lighting effects on the water reflections, highlights and splashes were made by my camera settings and use of slow synch settings on my external flash unit. I set my camera’s flash control to second curtain, had the 50mm lens attached to the body, and used F/9; 1/60 sec; ISO 250; and manual white balance.  Post processing was minimal: I cropped out two other children on the periphery, and used 2-pixels on a high-pass filter to sharpen the image.

If you want to learn more about Flickr’s Explore, as well as my brief experience with it, continue to read below. I’ll explain the general concept and the steps that lead to my photo being picked up. It’s a long read, but I imagine that some of you want to hear this experience to compare it against your own. Or maybe you are just curious.

SO WHAT IS EXPLORE? Everyday, visitors to Flickr.com can see a selection of “somewhat random” images culled from the previous day’s user uploads. It’s called Explore: a list of 500 photos placed in descending ranked order of unspecified “interestingness.” If you are using a Flickr APP, the pictures show up on screen if you use the “search” mechanism. The photos appear on screen if you select “Recent images.”

“Interestingness,” is a term that is defined in closely guarded trade secret algorithm that isn’t explained in Yahoo’s patents for Flickr.com(.) Numerous groups on Flickr exist to discuss Explore and to figure out how it works. Many contributors are tech savvy users who collect data on the selected photos, to analyze and understand patterns in the daily results. Truly, it seems that one must walk on water to get his or her image culled into daily selection on Explore, so I was amused that the title on my image was “Walking on Water.” Outside of the people who work at Yahoo and write programming code on Flickr, I think that only one guy has figured out how to get his image on to Explore.

On his personal Flickr profile he lists his occupation as “engineer.” Either he has figured out the secret inner workings of Explore, or with his first sheer lucky draw of having had an image picked to appear there, he gained a significant following of site users, who subsequently continue to like his photos once uploaded, and the cycle feeds on itself with comments, faves and another pickup onto Explore. Repeat. He’s had an image posted at the top spot on more instances than any other Flickr user in recent history.

No, I won’t name him; it doesn’t take long to figure out who he is if you wanted to find him yourself.  I began to follow his photo stream two years ago because his pretty landscapes are well-executed and made in an exotic landscape far away from my own. Occasionally, his images are terrific.  But I’m also following another 250+ other photographers on Flickr (one who is also WordPressing and following this blog, as I do his); and I add more now and then, too. When I step into their image streams I find wonderful pictures from all over the world that amaze, inspire, provoke and instruct me.

So many fantastic images are made everyday and shared online.  You are reading this, so you already know that Art is subjective. A picture favorably received by a large number of people, is not necessarily a great picture. It means many people saw it and liked it by applying the judgement from their own personal criteria. Who are these people? How do they come to appreciate the images? Does it matter? What about all the amazing photographs that get posted to blogs and share sites and never get seen or are only viewed by limited numbers of people? Are those bad images? No. It’s really a numbers game. Or is it?

Regarding insights to Explore, I’ve read that a photo can’t be submitted to a Flickr user group (which is a microcosm of Flickr users with a specialized theme/style/subject interest) and simultaneously get picked up to appear in Explore. Numerous photos on Explore prove that wrong. I’ve read that pick ups have something to do with a volume of views and faves and comments on a photo to make it interesting at one particular time of day. Through a sweeper of sorts. Many photos appear in Explore with few comments and likes.  I often wonder if the pickup has something to do with the individuals who do the commenting or liking; as in: there could be rainmakers. Secret rainmakers. Just maybe.

Nearly 7 years after I began to post images on Flickr, I had my first Explore pickup. Before the experience, I’d posted many photos that looked great, received decent feedback comments and accumulated healthy faves. But they were never scooped up to be seen by the widest audience of Flickr users. Did it make me wonder why not? Yes. Did I change my intended subjects for photos to only sunsets and the main B’s (Babies, Beasts, Beauties)? No.  But if you were to include Buildings and Boys on the list of popular subject matter, my Explored shots fit that bill.

Here is what I can say for certain. Two of my photos were picked up by Explore soon after being uploaded to my Flickrstream. The first time was on January 19th, 2015. If you want to see the ongoing stats and comments from Flickr users click here.

The second image was the one leading today’s blog post. It was uploaded in the afternoon, immediately following a head shot photo to my stream, and was the last to be uploaded. See the comments and faves on it here.

Within a few minutes of it going live, two of my Flickr contacts commented on the image without either of them giving the photo a fave. Both of these individuals have been Explored; does that make them Flickr power users or rainmakers?  An hour later, others had seen the photo and its faves had grown to ten. After that, I received an administrative invitation to post the photo to a group reserved only for photos appearing on Explore. That was a tip-off that my photograph could reach an ultra-wide audience in a very short time, and make things more “interesting” for me.

At that point in time, statistics on my photo went “numb.” By this, I mean that I couldn’t see any data on the numbers of viewers to the photo, nor could I see faves on it for another hour. When that time passed, I received an email alert from a probe program that soley exists to tell Flickr users about their activity on Explore. It revealed to me that at one point my “Walking on Water” image on Explore had an interestingness ranking of 160/500 and a lowest of 232/500; it came to a final resting place at 227/500. I am still slowly receiving hits and likes on it 24 hours later.

And now you are seeing it for the first time if you are not a Flickr user, or have not visited my image stream. When the image went live, I gave it subject metatags, though not a geo-tag since the subject was a minor.

In the end, I am grateful to have been given a chance to have my work seen by millions of Flickr users and visitors who view images in Explore. As I write this post, “Walking on Water” has been viewed 10,854 times. That number will continue to grow unless I remove it from my Flickr stream.

Perhaps someone will see my image and attempt to make their own photo using the same technique.  A handful of visitors to the photo decided to follow my photostream, and that itself is a reward. It’s gratifying to have an audience for photos that please me enough to share them.

So, I’ve shared my very recent experience with you. Thank you for reading to the end. If you have your own Explore story, please share it with us below in the comment area, or link to it with a pingback from your own blog. Did having a photo in Explore make an impact on you in some way?  Did it make you feel more engaged with an audience? Did you alter the way you find a subject or take a photograph? How did you discover that your image appeared in Explore?  What did you take away from the experience?

4 responses to “On Being Explored: Walking On Water”