John Lorenzo Hubbell (1853-1930) was an American pioneer considered to be the foremost Navajo trader of his time. In 1876 he formed the J.L. Hubbell Trading Post at Ganado, in Arizona Territory, which became part of the Navajo Nation in Northeastern Arizona.  Hubbell’s is the oldest continuously operating trading post in the American Southwest.   Thanks to the US Congress, The Hubbell Trading Post was established as a National Historic Site on August 28, 1965. A visit to explore the history, culture and life of the Old West can effectively put you in a time bubble.

Over the years Don Lorenzo, as Hubbell came to be called, opened more than 30 additional trading post locations in New Mexico and Arizona and gained fame as a trader of Navajo rugs. 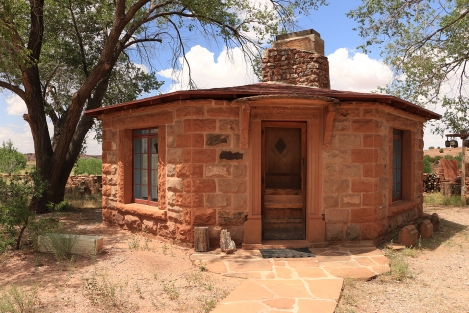 On site is a two-story barn, the original trading post with its bullpen mercantile, a room of baskets, jewelry, handmade crafts and yes, an amazing room of rugs.

When it was originally built, it was the only two-story barn in Northern Arizona and the Navajo

The 160 acre historic site  is within the Colorado Plateau geographic region at approximately 6300 feet in elevation. The environment is considered high desert shrub land with Pinon-Juniper woodland vegetation.

Sheep grazing on the irrigated fields

The shop is a melange of museum and active commerce. One starts out inside the mercantile for dry goods, and can then move into a room filled with handmade Indian folk art crafts for purchase, such as baskets, belts, pottery and jewelry. Moving still deeper, one arrives at the sanctuary to Navajo textiles. The rug room  holds historic relics, as well as textiles predominantly produced by Navajo artists, arranged by their various clans.

The Hubbell Rug Room | The natural light in the space created a sense of reverence, while Edison the guide explained how the textiles and rugs are organized by various clans; new items of varying size arrive on a weekly basis. The space perfectly balances the past and present. You will want to bring your credit card. 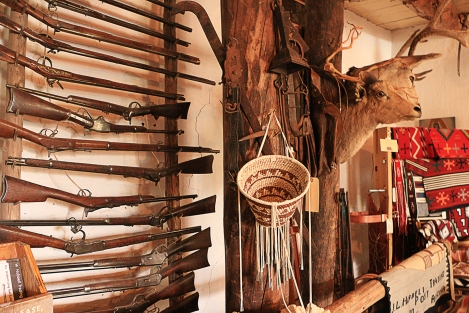 Relics hanging from the ceiling, walls and structural posts immediately frame the context of life in the Old West.